I’m not really sure how much I’ve shared on this topic, but I’m kind of a hater when it comes to the christian stereo-type. I was that person in high school who hung out with the stoners because they were the only people who accepted me for who I was. I tried to hang out with the “christian” group or, as I not-so-affectionately call them, the Cardigan Wearers, but I didn’t really click with them. I was shy and had massive trust issues and none of the people who were with that group took the time or effort to get to know me despite my problems. I’m not sure if it was in my head or not, but I didn’t really like going to prayer group and I never even tried pizza Wednesday because I felt like I wasn’t good enough for the Cardigan Wearers and that was why I wasn’t friends with any of them.

yeah. Teenagers are pretty messed up.

Part of what God really showed me last semester was that I’m a new creation(I’ve blogged about this, I KNOW. So you can go back in the archives and find the full story on that) and I am being renewed every second of every day.

Cardigan wearers always seemed so fake to me. They weren’t an emotional mess like I was, they had perfect little masks they put on like they didn’t have any problems. I hated that. I felt like I would never be able to connect with any of them because they put their masks on and weren’t real with each other. If there’s anything I’ve always been pretty strict about it’s being real with people. I hate a fake. I hate the facade. (Ironically enough, my facade is almost an antique I’ve had it for so long.) 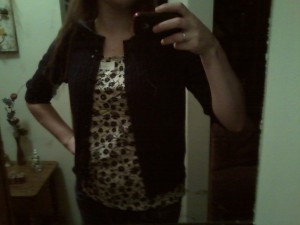 It’s true the cardigan is the most adorable thing ever, but as I was walking up to navs this evening I felt like I was being the most deceptive person in the world. I hate Cardigan Wearers! I’m totally not a Cardigan Wearer! Yet here I am wearing a cardigan. Life can be so strange. Sometimes we look like the cardigan wearing type when we obviously aren’t!

Yet the more I thought about cardigan wearers and I thought about the new me that has been redeemed and renewed by Christ the more I felt at home in my new cardigan. Except I’m not lying by presenting the face of innocence and perfection. Yeah okay, I’ve been a few places and done a few things in my short 18.99 years that are less than perfect and definitely don’t fit in with the cardigan, but that stuff doesn’t define who I am. That stuff was washed away the second I gave it to Christ.

Now I just pray I still have compassion for those who are still riddled with guilt and can’t let themselves be washed clean like old, high school me. I never want to give off the “I don’t care” vibe.  Not caring is for…. people who don’t care…? I don’t know…

Moral of this story…. You wear that cardigan!

This entry was posted in Girl-ness, Relationship. Bookmark the permalink.

One Response to The Cardigan-Wearing Type