Am I the only one who finds it ironic that I’m too lazy to write lazy posts? Yes, I could make a million excuses for why I didn’t post on Monday, and some of them may or may not be legitimate, but I’m not going to do that to you guys. Just kidding! The long and short is that two weeks ago as you may know I had noro virus and had to call into work on a Sunday. Because of that I had to work the following Saturday even though it was my weekend off. I had been planning to go visit my sister in Columbia but I wasn’t too sure if I could go. Well I decided to heck with it and went anyway. I came home on Monday and didn’t feel like blogging BECAUSE I was physically, mentally, emotionally, and spiritually exhausted. As a result I had a million half-formed lazy posts and no energy to think them through.

This exhaustion has chased me into this week, but yesterday I mopped the kitchen floor and did the dishes and whatnot, so I figured I could write a post. The question is what about…

As I have mentioned numerous times before I’m doing this thing where I’m reading a non-fiction book a month. January it was Francis Chan, February it was C. S. Lewis, March I read a book by Max Lucado. For April I had intended to read Letters to Malcolm: Chiefly on Prayer by good ol’ Jack, but yesterday I was bleeding all over myself and God and I decided prayer isn’t really something that’s lacking in my life right now. There’s another book by Lewis that I’ve been longing to read ever since I read Surprised by Joy in February. The Problem of Pain. C. S. Lewis addresses the question “If God is so good then why is there pain?”

I did a quick library search and saw that the only copies of TPOP could be found at the downtown library, which closes at 1700. It was 1714 when I checked. Curses. At that point I realized that most of the C. S. Lewis works that I enjoy oh so much would be locked up in the prison downtown where I with my long days have no hope of ever freeing them(It’s no wonder Lewis gets weeded so much. All the people who read his works have jobs!)

For my birthday my parents gave me a small sum of money. I was intending to either save it or buy a book with it(either Grudem’s Systematic Theology or a collection of C. S. Lewis’s non-fiction works.) 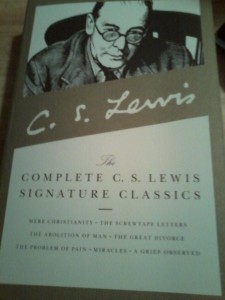 Now I don’t have to brave one way streets or fight with the parking enforcement(because I have no coins) In order to get my Lewis fix… Thanks Mom and Dad!

This entry was posted in Lazy Mondays. Bookmark the permalink.