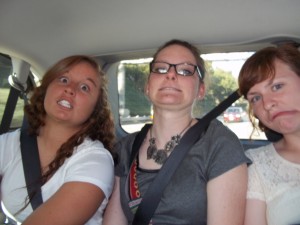 I think the coolest thing that’s transpiring at IT at the moment is the developing relationships. Although I can’t really even compare anything to Perspectives because it’s in a class of its own. Double chin!

We visited the Mormon temple yesterday. It was very informative and educational, the poor sisters who got bombarded with our questions were amazing sports about it. But I’m not really sure if I like knowing what I now know about the LDS church.

For all my whovians out there, you know that episode where Amy and 11 visit new Great Britain and there are those creepy puppet poll booths and you watch the video about what they did to the star whales and you can choose to either protest or forget? Yeah honestly if I had that choice about the Mormon faith I might push the forget button. Maybe. Except…

I am so blessed to belong to a faith where I don’t have to work for my salvation. There aren’t any levels of heaven that I have to work to get to the highest one. My God is so big he can do whatever He wants and it doesn’t really matter how good or bad or righteous I am. It is literally God who does His work for me, not the other way around. Like the Mormons I know that I will be reunited with my family after I die, but that is because they’ve all admitted that their righteous works are like filthy rags before God and they’ve accepted God’s forgiveness through Jesus Christ’s death on the cross. Additionally, not only will my biological brothers and sisters will be in heaven, but my brothers and sisters in Christ will be there as well. I have the hugest family ever, guys! Comprised of literally every person who has ever laid down their own works and accepted the righteousness that God offers us through faith in Jesus Christ’s death.

How can I, being so blessed, stand by while people all over the earth are trying and failing to be good enough for heaven? I have the good news that brings peace. That brings an end to the exhaustion of trying while simultaneously giving 100% assurance of salvation. Why would I keep that to myself?