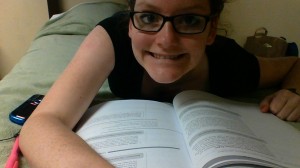 I don’t know if you’ve noticed, but I’ve been a little AWOL the last few days. It’s okay though. Everything’s fine. We’ve been talking about the time between the New Testament and present time. I had no idea the dark ages were so fascinating.

I have a new personal hero. Grace Wilder. She prayed and God started the Student Volunteer Movement. So that’s pretty awesome. And in case you are wondering, yes she is a relation to Laura Ingalls Wilder. Niece to be exact. Royal’s daughter. But yeah. Pretty awesome.

We had Rendez-vous night last night and apparently there’s this thing in California called PizzaRev. It’s like Subway only artisan pizza. Which after creeping on their website they’re building one in Lincoln. So now I’m really really excited.

I’m learning a lot. My life is being shaken. In a big way. God has really shown up in a huge way in the last fifteen days. Additionally I’ve never gotten so close to so many people in so short a time. Pretty much fantastic.

See y’all later. I’ve got some sleeping to do. We’re going to San Diego this weekend for funsies as a small group, so I need to catch up on all the rest.

One Response to Day Fifteen: History